First Walking Liberty Half Dollar and other Metal Detecting Finds

Man, life has a way of getting in the way of important stuff, like metal detecting, doesn’t it? You know me though, like a ninja, I’m gonna sneak a few hunts in here and there…

A few hunts back, I had gotten permission to detect at a house from around the 1930’s, with about 1 acre of land to cover.  I invited a couple of buddies to go with me, and we gave it the old college try in our search for silver, but weren’t able to find any silver coins.

As a matter of fact, there weren’t any coins to be found anywhere. : /

Between the three of us, this North Shore Animal League token was the only coin-type item we found.

but, I was happy that it was something different.  The North Shore Animal League America is the world’s largest no-kill Animal rescue and adoption organization.

Last year sometime I found the insides of a pocket watch at a different 1930’s property.

I had always wondered if the outer case to the pocket watch was still there somewhere, so I went back recently with my Minelab CTX 3030

to see if I could find the case.

I didn’t find the pocket watch case, but I did find a Pocket Watch Fob that I believe goes with the inside piece that I found previously at that site

Based on the back stamp, it is obvious that the fob was either nickel or silver plated at one point, meaning that the case was also probably plated as well. 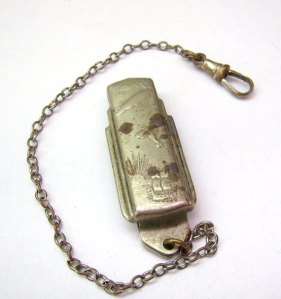 Here is an example from Google Images that shows how it would have been used, for demonstration purposes…

As far as the Fob that I found goes, I love it that it has an ‘E’ inscribed on it. That gives it a personal touch and in my opinion is what makes the watch fob a cool find.

Park hunts are always fun, and recently I decided to metal detect at a park that I had suspected might be worth detecting.  I wasn’t having much luck on the playground so I decided to wander around, and got an interesting tone on my AT PRO metal detector so I slowed down and investigated the target a bit more.

It wasn’t ideal silver numbers, but there was enough to the tone that I decided to dig it.  I’m glad I did because I found this .925 Silver bracelet about 5 inches deep.

Later I decided to swing by a spot where I have made a few some good finds in the past. I wanted to see if there was still good targets there so I set out on a mission to dig some iffy targets, purposely.

Near a large tree that I know other detectorists and myself have detected around, I heard a squeeker high tone that caught my attention, but it also sounded like the target could be junk because there was also a mid tone mixed in there with the squeeker.

Since I was purposely searching for iffy targets, I decided to go ahead and dig this one based on small target foot-print, the occasional 70’s number, and the high tone I could sometimes hear when I swung over the target.  Around 7 inches deep I saw the edge of the coin in a dirt ball, and immediately knew that I had a silver coin.

I couldn’t believe it though, I found my first Walking Liberty Half Dollar, a 1947!

I was excited to find a silver half dollar but wondered how the heck it showed low 70s on the target ID screen of my AT Pro?

As I scanned the hole again, hoping for another one (lol) I heard my pinpointer go off, and got excited, but it was only a fence nail… Then it made sense, that’s why the numbers were below ‘typical’ silver numbers, the iron in with the coin was pulling the TID numbers down.

That is why I detect by tone first, and numbers secondly, and if you read back you’ll remember that initially I heard the high tone of the coin which prompted me to further investigate.  The numbers help, but you can’t rely on the numbers, they will lie to you, like this coin did!

That’s how myself and others missed this coin in the past. There is no telling how many guys detected over this coin and left it because it was not ideal “dig me” numbers.  I sat out that day to dig those iffy tones and numbers, to see what we had missed in the past…

So I guess the moral of the story is to go back to those spots that you think are hunted out, because there are still targets there the ‘pros’ missed…just waiting for you to be willing to dig a target that they weren’t willing to dig.

I didn’t find anything worth mentioning at this barn, but figured you might enjoy a picture of an old Ozark Mountains Barn. These barns are becoming more rare every day, so we have to enjoy their historic beauty while we can.  This one was very well made, obviously.

Well my friends, thanks for checking out my recent finds. I hope you all have the best of luck out there this season and I can’t wait to see more of your cool finds soon!

with Pro-Pointer AT Underwater Pinpointer