In the hobby of metal detecting we always say that  “You never know what you’re going to find when detecting.”  That proved to be true recently when I detected an old school yard where I found an Italian 200 Lire Coin that was definitely a surprise. At first I thought it was a gold coin when it was still dirty because I didn’t recognize the face. Either way a neat find for around here. 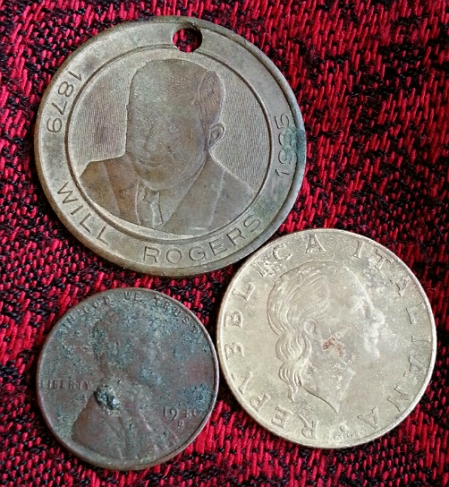 After my hunt at the old school I decided to swing by an old house that I’ve been trying to get permission to detect for a long time. I’ve been by there at least 5 times, and finally someone was home. The property owner told me that he’d rather I didn’t detect the yard which is understandable because most people don’t know how we dig a plug. Anyway, I asked if I could detect his side lot and he said to go for it.  It was a small corner lot, so I started in one corner and worked my way across the yard.

Along the broken old sidewalk I found the wheat penny which gave me hopes of finding a silver coin eventually.  It didn’t take long to realize that the old house that once sat there had been bulldozed because there was metal junk everywhere.

I noticed one corner of the yard looked like it was relatively untouched along a fence line, so I decided to slow down in that area.  I was running my Minelab CTX3030

and got a nice quarter tone/ readout.  I was hoping for a silver quarter but was happy to see something round in the hole. It turned out to be this Will Rogers Memorial token. 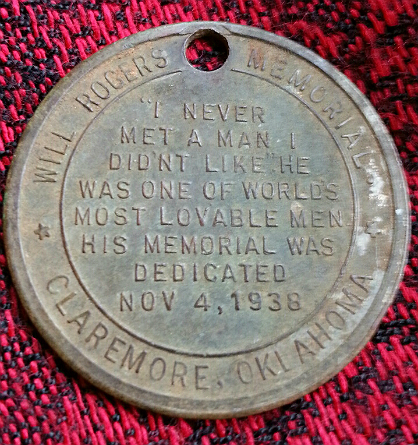 When I die, my epitaph, or whatever you call those signs on gravestones, is going to read: “I joked about every prominent man of my time, but I never met a man I dident [sic] like.” I am so proud of that, I can hardly wait to die so it can be carved.[6]

Finds like these are what makes the hobby of metal detecting exciting for me. Learning the historical background, finding coins

that I didn’t know existed and being out in nature enjoying my hobby, Nothin better!