Some of my favorite finds are the most unexpected finds. Things like tokens from around the United States, military or other types of medallions, and even foreign coins.  I had a chance to do something most detectorists never get to do and that is detect on a now defunct golf course this past weekend.

One of the cool things about detecting there is that there wasn’t much trash in the ground so I didn’t have to deal with pop tabs and foil although I did find a couple of tabs, they were near where a trash can had been.

The “junk” finds there were mostly the golfers cleats, but some of them were neat because they had Pro Golfers’ names on them like Fuzzy Zoeller.  I had found an Arnold Palmer one there awhile back too. 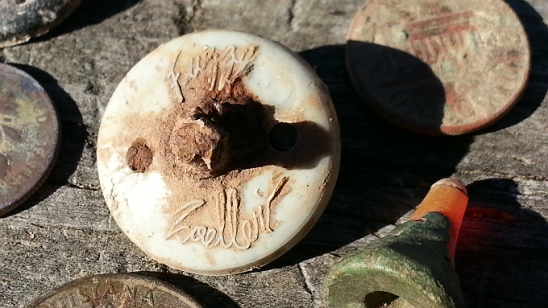 “Frank Urban “Fuzzy” Zoeller, Jr. is an American professional golfer who has won ten PGA Tour events including two major championships. He is one of three golfers to have won the Masters Tournament in his first appearance in the event.” –Wikipedia

While not valuable, the various cleats are ‘neat’ finds and they sounded good in my headphones.

As I was going along I got a nice high tone with my E-Trac that stayed a steady 46 conductive number so I knew that there was a good possibility of the target being a quarter. I was hoping it would be a silver quarter and decided to go ahead and dig it.

About 6 inches down in sandy loamy soil on where the fairway was I saw something round in the hole and at first thought it was a clad quarter.

Once I saw the horse on it I knew that it wasn’t a clad quarter but I still didn’t know what it was. 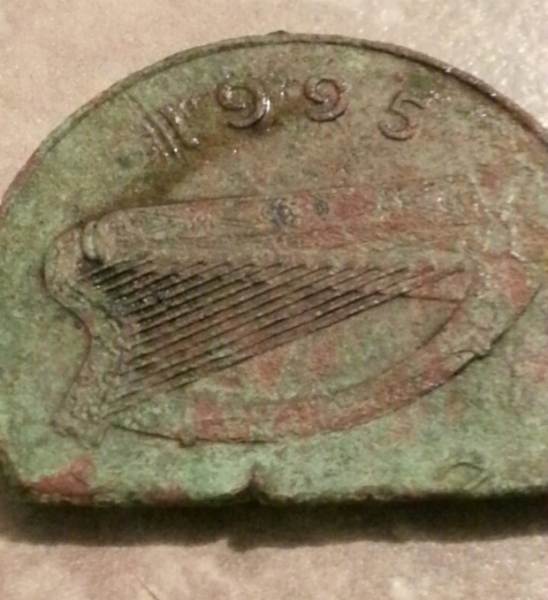 I flipped it over and saw what I thought was a Harp on the reverse side and the date 1995, then I was really curious to find out what this coin was. Initially I had thought that it was probably some sort of token, but then I noticed that the reeded edges and that it was most likely a foreign coin.

After some research I learned that this coin is an Irish 20 Pence Coin minted in 1995.

“The twenty pence (20p) coin was a subdivision of the Irish pound. It was introduced in 1986.

It features the horse (an Irish Hunter) that was on the pre-decimal half-crown coin, that was produced from 1928 to 1967.

Mine is priceless to me, lol 😉 How cool is that? To find an Irish coin on a golf course! haha… I figure that a golfer probably lost his lucky coin.  It appears as if the coin had been sheared purposely based on the beveled edge.  If you ask me, it just gives the coin character!

I was happy to find the 20 Pence coin from Ireland and it was my best find of the day.  As you can see in the picture above I also found a few clad coins here and there.  It was a beautiful day outside and I enjoyed getting out and swinging the E-Trac for a few hours.

I didn’t expect to find much on a golf course, but as you can see there was a few goodies to be found.

It was a fun hunt, the sun was shining, and I got to do a little beepin’!