I had a chance to go detecting for a few hours Wednesday so I decided to take my son to the playground. I’ve hunted this particular park at least 5 times, so I wasn’t really expecting to find much more than some peace and quiet. When we got there I started detecting around some metal picnic tables. My technique for detecting around metal equipment is to first swing my detector near the metal bars and see what type of signal they give, and what the general vdi is. Then, if I hear any variances in tones I investigate further with the propointer.

I found a dime at the corner of the table and a few clad coins in the gravel area of the park but the area was pretty clean. I decided to move over by the basketball court where I don’t normally hunt. I’ve gone around the court once before but it was a quick hit and miss type of hunt. My first signal was a quarter signal so I called to my son to come and pinpoint the coin for me. I knew it was shallow, and I knew the propointer could easily find the coin. He located the target and I dug down about 2 inches, and there it was, a washington quarter.

About 4 inches down I pulled out a 1984 nickel and scanned the hole again with my propointer and found a little elephant charm with ‘diamond’ stones all over it. What a cool little find. I happen to like elephants and this little guy made my hunt! It’s just a charm and costume jewelry but I was happy to find it. 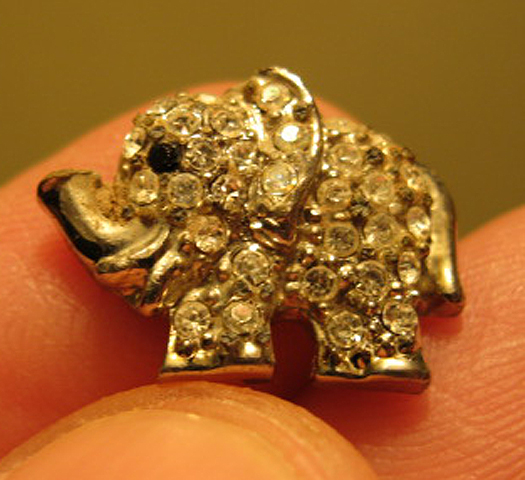 My son was getting bored and asked if we could leave. I told him that we would leave in a few minutes, but first I wanted to dig at least one more target. I got a quarter signal but the problem was that when I raised my coil off the ground the target appeared to be fairly large. I started pinpointing and got a good signal in two separate areas. My son was there with me helping dig, and after digging about 4 inches down I pulled out a quarter and scanned the hole again. Bam, another quarter in the same hole. My first pocket spill! Then I realized that there was another coin in the hole, yep, another quarter. We both got excited at our cache of treasure! 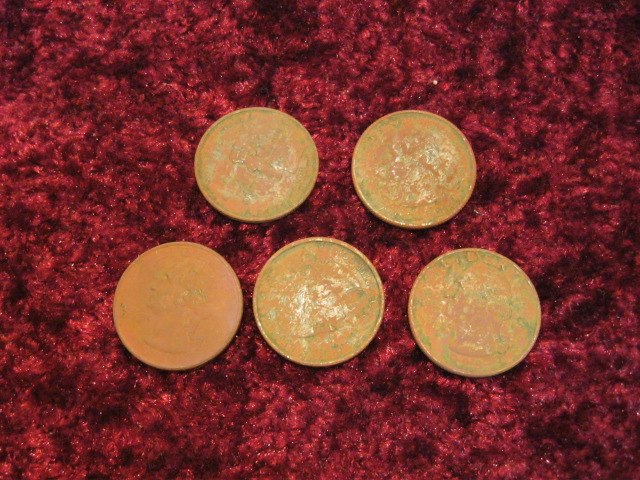 I put the flap back and stood up and waved my coil over the area again and got a good quarter signal. I dug two more quarters from that hole making it a total of 5 quarters in the same hole!

That’s when I noticed my son pick up some type of paper trash off the ground and immediately threw it back on the grass. I said, “Hey, don’t do that! You’ll get us kicked out of the park, go put that in the trash can over there.” So, he did and on his way back he sat on a small retaining wall next to the playground. I was digging a dime signal, and looked over and watched him sitting there for a second. I retrieved my target and my son started walking back my way. I could tell that he wanted to go, so I decided to call it a day as I was patting the grass around the plug I had just filled.

“Look at the metal I found metal detecting dad,” my son said holding up a razor blade. I said “Son, where did you get that, put it down it can cut your fingers off!” He dropped the razor blade on the grass and said, “I got it over there on the playground next to the trash can.” Whoa! I had been over there detecting, but a large metal trash can was in that corner of the playground, so I had just avoided that area mostly.

It just goes to show you that you never know what you will find on a playground. Last year I found a hypodermic needle within 4 feet of a swingset in a local park. The area that I live in isn’t the typical type of place that one would find those things, but obviously there are still a few shady types no matter where you go.

Wear gloves when you are digging, even in the summer time. There are several types of gloves on the market that can help protect your hands when digging. A simple google search can help you find a pair of gloves.

Thanks for reading my friends. Happy Hunting and stay safe out there!

I enjoy Metal Detecting in The Ozark Mountains and surrounding areas where I primarily detect for relics and coins. I have tested and used over 20+ metal detectors as a dealer and Company Sponsored 'Pro Staff' Product Tester. Previously Senior Editor of Detecting365 Metal Detecting Magazine for 7 years. I have authored over 200+ articles published on multiple metal detecting websites and magazines. I have real world experience testing metal detectors in the field and enjoy teaching others how to become better metal detectorists. Questions? Shoot me a contact email! Check out my Recommended Metal Detecting Supplies here: http://amazon.com/shop/wedetect
View all posts by Ozarks →
This entry was posted in Coins, Doing Good, Found Treasures, Metal Detecting, Safety and tagged metal detecting. Bookmark the permalink.